Mexico 0-0 Poland: Robert Lewandowski has second-half penalty SAVED by Guillermo Ochoa as he’s denied a first ever World Cup goal, with neither side able to take advantage of Argentina’s defeat

By Liam Morgan For Mailonline

The Mexican goalkeeper produced yet more World Cup heroics as he saved a second-half penalty from Robert Lewandowski in an otherwise dour Group C affair in Doha.

Lewandowski’s wait for a World Cup goal goes on after he was denied by Ochoa from the spot in the 57th minute following an intervention from VAR.

Referee Chris Beath was sent to check the pitchside screen after Hector Moreno grabbed Lewandowski’s shirt and appeared to haul down the Barcelona striker. 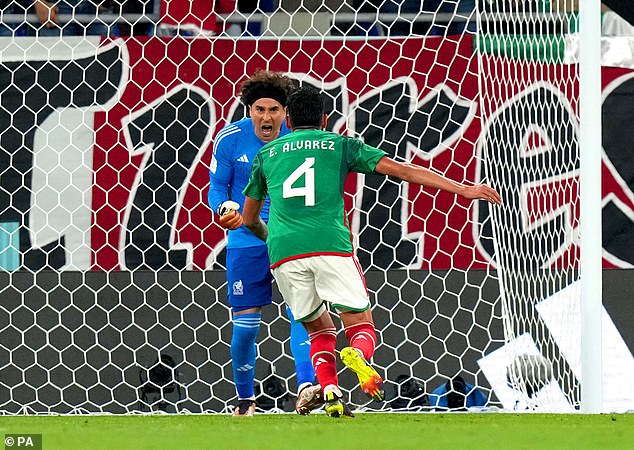 But, in truth, Lewandowski did not look confident as he stepped up and Ochoa comfortably saved his effort, much to the delight of the vociferous Mexican contingent inside of Stadium 974.

Ochoa has become synonymous with the World Cup with his displays at the tournament. The 37-year-old joins Lionel Messi in playing at a fifth tournament, with Cristiano Ronaldo expected to also become part of that exclusive club when Portugal play Ghana on Thursday.

His save from Lewandowski was the only real moment of note in a drab contest that lacked the drama of Saudi Arabia’s shock win over Argentina in the other match in the group earlier on Wednesday.

That stunning result perhaps had an effect on Mexico and Poland, who many tipped to be chasing second spot in the group behind Argentina.

Recap the match between Mexico and Poland below.