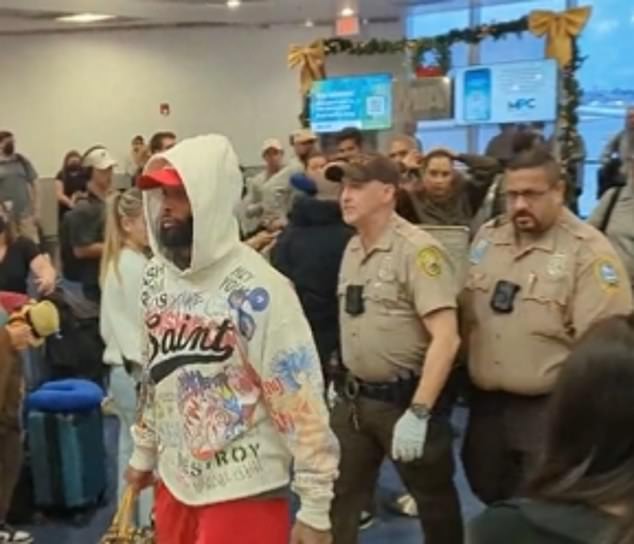 Odell Beckham Jr is labelled ‘aggressive and rude’ after he was kicked off a plane at 9:30am in Miami while drifting in and out of consciousness and delayed ENTIRE flight… as NFL free agent tweets: ‘Never in my life have I experienced what just happened’

By Jack Bezants For Dailymail.Com

Odell Beckham Jr was  kicked off a plane in Miami that was bound for Los Angeles on Sunday after a police were called on a medical emergency where he was reportedly ‘drifting in and out of consciousness’.

The flight was scheduled to take off at 9:30am from Miami but was delayed for nearly an hour and 30 minutes before departing. Passengers were forced off the plane after Beckham refused to leave at the request of police.

Beckham, meanwhile, tweeted on Sunday: ‘Never in my life have I experienced what just happened to me… I’ve seen it alll..’

He then tweeted ‘Never. In. My. Life’ and ‘I COULD NEVER MAKE THIS UP’.

Footage also surfaced of Beckham Jr appearing to be escorted by police to the ticketing area of the airport in Miami.

The person who filmed Beckham Jr being escorted through the airport replied to another tweet of his, which said ‘comedy hour’, with: ‘Forcing us off the plane because you were unresponsive and unruly is not comedy to the hundreds of folks trying to get home dude. Not cool man.’

Another person claiming to be on the flight wrote on Twitter: ‘I was on this flight he wasn’t unresponsive he was SLEEP.

‘They tried to wake him up to put on his seat belt a couple times then they got aggressively rude with him and he responded with the same energy GTFOH.’

A police statement said: ‘At approximately 9:30 a.m., officers from the Miami-Dade Police Department, were dispatched to a medical emergency at an American Airlines flight.

‘The flight crew was concerned for a passenger (Mr. Odell Beckham), as they tried to wake him to fasten his seat belt, he appeared to be coming in and out of consciousness, prior to their departure.

‘Fearing that Mr. Beckham was seriously ill, and that his condition would worsen through the expected 5 hour flight, the attendants called for police and fire rescue.

‘Mr. Beckham was escorted to the non-secure area of the terminal by the officers where he made other arrangements.’

An American Airlines statement added: ‘American Airlines flight 1228, with service from Miami (MIA) to Los Angeles (LAX), returned to the gate before takeoff due to a customer failing to follow crew member instructions and refusing to fasten their seatbelt.

‘The customer was removed and the flight re-departed at 10:54 a.m. local time.’

NFL star Beckham, 30, is a free agent and is in the final stages of recovering from an ACL injury sustained when he was playing for the LA Rams in the Super Bowl in February.

He has been linked with signing for a number of teams and earlier this week the Dallas Cowboys owner Jerry Jones was talking up the prospect of Beckham joining.