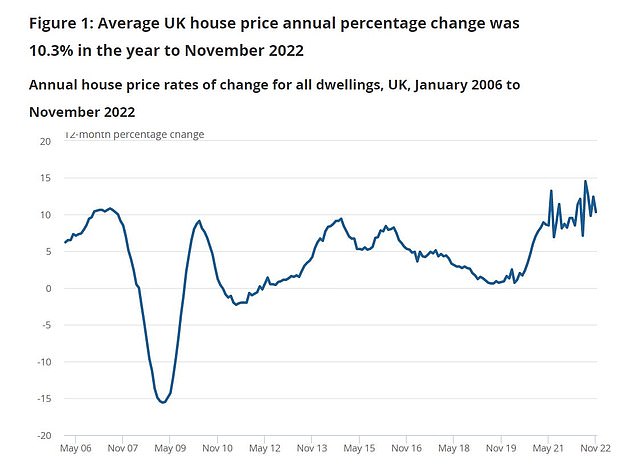 By Fran Ivens For This Is Money

The average house price increased 10.3 per cent in year-on-year to November to £295,000, £28,000 more than the year before, according to the Office for National Statistics.

The annual growth rate also slowed, falling from 12.4 per cent the previous month.

House prices fell by 0.3% in November compared to the month before, with annual growth slowing to 10.3%

Mark Harris, chief executive of mortgage broker SPF Private Clients, said: ‘Back in November, both swap rates and fixed-rate mortgages were rather higher than they now, as a result of the fallout of the mini-Budget.

‘Much of that turmoil has passed through the system now, with swaps and fixes continuing to fall.

‘While the days of the sub-1 per cent five-year fix may be long gone, it’s only a matter of time before they edge below 4 per cent as the cost of funds falls, servicing pressures subside and lenders look to originate new business.’

They also blamed the annual Christmas lull in the housing market for the slight fall in prices.

Tom Bill, head of UK residential research at Knight Frank, added: ‘After September’s mini-Budget, a number of buyers and sellers switched off early for Christmas, which explains December’s drop in activity. However, the last quarter of 2022 doesn’t tell us very much about what will happen this year.

‘Buyers and sellers increasingly understand that although mortgage costs are edging down, a new normal of higher rates is emerging that it will soon no longer be possible to blame the Liz Truss Government for.’

In Parliament this week, Bank of England Governor Andrew Bailey told MPs that the mortgage market has seen a correction with product rates falling from the highs seen in October last year.

‘I’m talking there about the lower-risk end of the mortgage market, so loans with a sub-75 per cent loan-to-value, and actually the higher-risk end as well.’

Economics director at the Construction Products Association, Noble Francis, said: ‘The ONS house prices in November were still based on transactions (and often mortgage deals) agreed before the fallout from the mini-Budget and sharp rise in mortgage rates so we haven’t seen the impact as yet.’

Predictions on how house prices will fare over the next 12 months vary, but several analysts have suggested that they could fall by up to 10 per cent.

The Office for Budget Responsibility has said house prices are set to fall 9 per cent between the end of 2022 and the end of 2024.

And elsewhere estate agent Savills has updated its forecast to a 10 per cent fall in house prices over 2023.

What to do if you need a mortgage

Borrowers who need to find a mortgage because their current fixed rate deal is coming to an end, or because they have agreed a house purchase, should explore their options as soon as possible.

What if I need to remortgage?

Borrowers should compare rates and speak to a mortgage broker and be prepared to act to secure a rate.

Anyone with a fixed rate deal ending within the next six to nine months, should look into how much it would cost them to remortgage now – and consider locking into a new deal.

Most mortgage deals allow fees to be added the loan and they are then only charged when it is taken out. By doing this, borrowers can secure a rate without paying expensive arrangement fees.

What if I am buying a home?

Those with home purchases agreed should also aim to secure rates as soon as possible, so they know exactly what their monthly payments will be.

Home buyers should beware overstretching themselves and be prepared for the possibility that house prices may fall from their current high levels, due to  higher mortgage rates limiting people’s borrowing ability.

How to compare mortgage costs

The best way to compare mortgage costs and find the right deal for you is to speak to a good broker.

You can use our best mortgage rates calculator to show deals matching your home value, mortgage size, term and fixed rate needs.

Be aware that rates can change quickly, however, and so the advice is that if you need a mortgage to compare rates and then speak to a broker as soon as possible, so they can help you find the right mortgage for you.