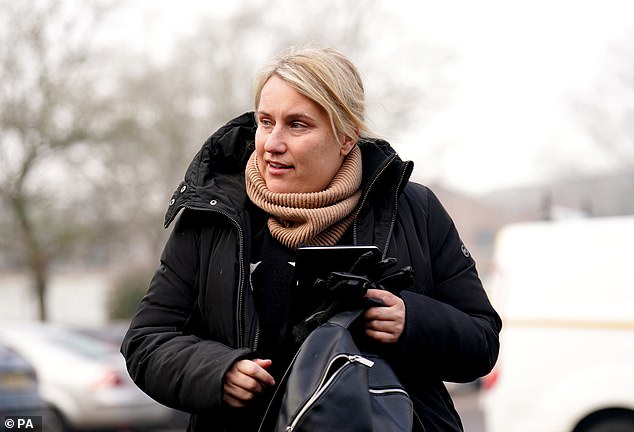 By Lewis Browning For Mailonline

Chelsea versus Liverpool was called off after just six minutes of play in the Women’s Super League after the surface was deemed unplayable.

There was a pitch inspection at 9:30 this morning ahead of the game at Kingsmeadow, with ice cleared off the pitch just minutes before kick off.

But just as the game got underway, referee Ben Hair stopped play and postponed the match, which resulted in anger from the players and fans and Chelsea manager Emma Hayes speaking to supporters in the ground.

Supporters were forced to wait over half an hour for the result of the inspection, with many supporters frustrated, particularly away fans who had travelled to the capital from Merseyside.

There was doubt when confirmation arrived that game would still kick off at 12:30, the referee paused proceedings and spoke to both Hayes and Liverpool boss Matt Beard.

Liverpool players then left the pitch before it was confirmed the game would be called off, which resulted in boos from the stands as the Reds players showed their appreciation to the travelling supporters.

Hayes, speaking to the fans, said: ‘The decision to call it off at this moment is wrong for the timing but right for the players.’

She then told BBC Sport: ‘You could see it’s like an ice rink. It’s not for mangers to determine it. We have to have undersoil heating to take our game seriously.

‘The game should never have started. Everybody wants to get the game on but outside parties have to execute those decisions. The FA are not here. No game should be cancelled – we need undersoil heating.’