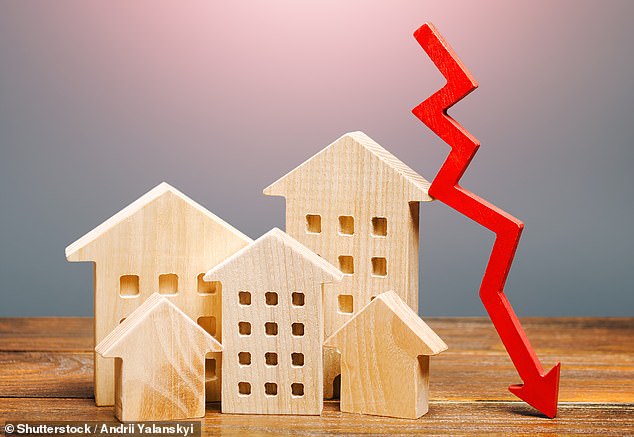 This week, the Bank of England Governor Andrew Bailey told MPs that fixed mortgage rates had come down from the highs seen in October in the wake of the mini-Budget.

‘We have seen that new fixed-rate mortgage rates have come down since, both for the lower-risk end of the mortgage market—I am talking here about sub 75 per cent loan to value—and the higher-risk end,’ he said.

‘We have seen correction in that respect, and that benefits people seeking mortgages.’

Rates have fallen rapidly since November last year. On 1 November the average rate for a two-year fixed mortgage was 6.47 per cent, but by 20 January it had dropped to 5.53 per cent.

Going down: Fixed mortgage rates have been falling steadily since the end of November and are set to go back below 4%

Most end of year predictions anticipated rates settling somewhere between 4 and 5 per cent. But with the cheapest five-year fives now around 4.2 per cent and falls showing no signs of stopping, could they go even lower?

>> Nationwide and Halifax CUT mortgage interest rates: Is this the start of a ‘price war’ and will costs for borrowers continue to fall?

What are the best mortgage rates on offer?

Current deals for those with 40 per cent deposits include a 4.19 per cent rate from Yorkshire Building Society on a five-year fix, and 4.49 per cent for a two-year deal from Bank of Ireland.

For 10-year fixed rates, Halifax is offering an even cheaper 4.04 per cent – though all of these deals come with fees attached which will drive up the overall cost.

Jane King, mortgage and equity release advisor at mortgage firm Ash-Ridge says: ‘The best deals are for buyers or owners with large deposits as you would expect.

‘If you want a five-year fixed then the offer with the Yorkshire is worth considering.’ 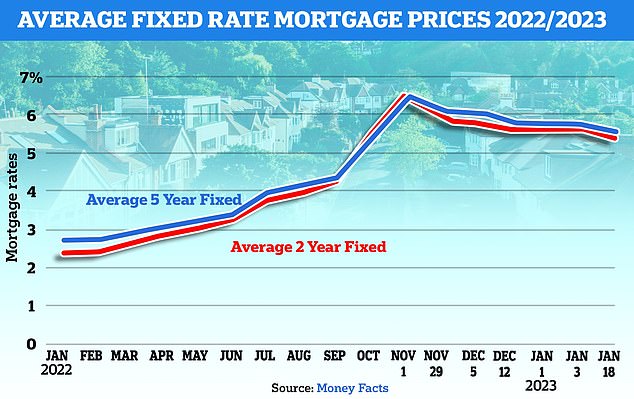 Ups and downs: Mortgage rates have gradually risen since the Bank of England began raising the base rate. They then spiked after the mini-Budget, but are now slowly reducing

Furthermore, major lenders including Halifax, Nationwide and The Mortgage Lender have all reduced their rates.

Nationwide has reduced its rates across its product range by up to 0.2 per cent, while The Mortgage Lender has cut prices by up to 0.4 per cent.

Will we see rates go back to below 4% this year?

“I think we are well and truly engulfed in a rate war,’ says Matt Coulson, director and principal at mortgage broker Heron Financial.

‘Lenders are responding to the slowdown in activity at the end of last year and they can only really compete on rates as there is only so much you can do about criteria. So if they want more business they have to make their products cheaper.’

John Charcol’s mortgage technical adviser, Nicholas Mendes, says mortgage rates are falling in part because swap rates have continued to fall over the past few weeks.

Swap rates are an agreement in which two counterparties, such as banks, agree to exchange a stream of future fixed interest payments for another stream of variable ones, based on a set price. They tend to show where the markets think mortgage rates are headed in the longer term.

‘Lenders theoretically could have passed on greater reductions to fixed rates sooner, but the impact this could have had with existing mortgage application looking to change their rate to a lower one, as well as taking on new business would have affected their service levels,’ Mendes says.

‘As a result, we saw small reductions on a weekly or fortnightly basis.

‘With the time it takes lenders to process a mortgage now shortening, we are returning to a period of competition,’ he says.

Chris Skyes, technical director at Private Finance, says it is inevitable rates will go below 4 per cent – but when this will happen is less clear.

‘Unfortunately, it is anyone’s guess – but with 10 year mortgages the closest to sub 4 per cent, and swaps in this space more stable and lower than previous weeks and months, it is possible that lenders reduce rates further to attract long-term business,’ he says.

‘Lenders could even reduce below 4 per cent as somewhat of a loss leader or “break even” product just for the headline. We’ve seen this before.’

However, the Bank of England’s Monetary Policy Committee is meeting in two weeks and is expected to raise the base rate by 0.5 per cent to 4 per cent, continuing its battle against inflation. 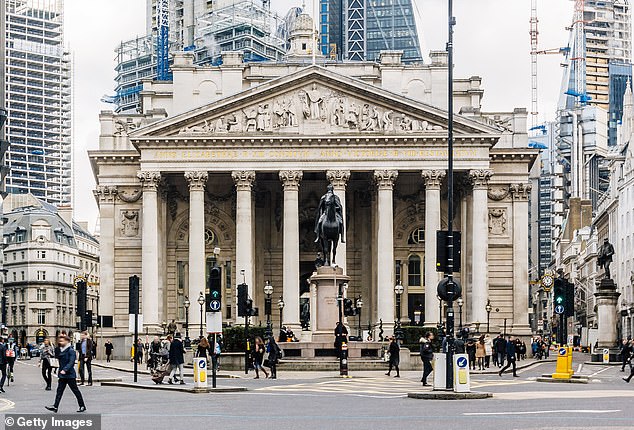 Big decision: The Bank of England is expected to raise interest rates to 4% in a fortnight’s time as it steps up its battle against stubbornly high inflation

The Bank has already raised rates from a record low of 0.1 per cent in December 2021 up to 3.5 per cent now in a desperate effort to tackle inflation.

The CPI inflation figure stood at 10.5 per cent in December, down from 10.7 per cent the previous month and also from the 41-year high of 11.1 per cent recorded in October.

Rising interest rates have driven up the cost of mortgages and other loans, so borrowers will have their eyes on the Bank’s decision on 2 February.

Should borrowers consider a tracker mortgage?

Another option for those looking to reduce their costs could be to look at variable rates. This could allow them to hold out on locking in to a fixed rate until the picture on rates becomes clearer.

Mike Staton, director at Staton Mortgages says ‘Tracker mortgages without early repayment charges still appear to be popular, as customers are using these to bridge the gap between today’s high fixed rates and a potential return to sub 4 per cent two-year fixed rates in early 2024.

‘Whilst 10-year and five-year fixed rates should dip below 4 per cent in time for the summer, buyers should expect huge fees with these products as the lenders will be wanting to make money somewhere.

‘If you have a 40 per cent deposit then trackers are currently available at 3.74 per cent’.

What about a cheap 10-year fixed mortgage?

This is because 10-year interest rate swaps are currently lower than their two- and five-year equivalents, meaning the market thinks interest rates will be lower in 10 years’ time compared to in two and five years.

However, it isn’t quite that simple. It’s hard to predict where interest rates will be in a year’s time let alone a decade, unforeseen events can throw the market into flux – as the mini budget proved.

Taking on such a long-term deal runs the risk of paying more for your loan overall, if rates fall faster than the market predicted, and you remain stuck at a higher rate.

But there is often flexibility within the products. Most allow you to port your mortgage – taking it with you on the same terms if you move properties before the end of the loan.

But if your circumstances change and you want to get out of the loan, most will have onerous early repayment charges making it costly to do so.

What to do if you need a mortgage

Borrowers who need to find a mortgage because their current fixed rate deal is coming to an end, or because they have agreed a house purchase, should explore their options as soon as possible.

What if I need to remortgage?

Borrowers should compare rates and speak to a mortgage broker and be prepared to act to secure a rate.

Anyone with a fixed rate deal ending within the next six to nine months, should look into how much it would cost them to remortgage now – and consider locking into a new deal.

Most mortgage deals allow fees to be added the loan and they are then only charged when it is taken out. By doing this, borrowers can secure a rate without paying expensive arrangement fees.

What if I am buying a home?

Those with home purchases agreed should also aim to secure rates as soon as possible, so they know exactly what their monthly payments will be.

Home buyers should beware overstretching themselves and be prepared for the possibility that house prices may fall from their current high levels, due to  higher mortgage rates limiting people’s borrowing ability.

How to compare mortgage costs

The best way to compare mortgage costs and find the right deal for you is to speak to a good broker.

You can use our best mortgage rates calculator to show deals matching your home value, mortgage size, term and fixed rate needs.

Be aware that rates can change quickly, however, and so the advice is that if you need a mortgage to compare rates and then speak to a broker as soon as possible, so they can help you find the right mortgage for you.